Garuda, Remains To Struggle In Profitability, Not The Best Airline Company In Domestic

Jakarta, 20 Juni 2014 - PT Garuda Indonesia (Persero), Tbk (GIAA), the state-owned airline company in Indonesia, booked a loss amounting to US$ 163.90 million in 1Q2014, while revenue just inched up 0.01%. The other airlines in the region have been facing high expenses too, but none experienced a loss like Garuda. Even in domestic routes, Garuda’s passenger growth was lower than Lion Air’s and Indonesia Air Asia’s.

Garuda’s loss occurred due to increasing of expenses, especially direct cost, freight operation expenses, airplanes maintenance expenses, promotion and ticketing and surcharge expenses. Those rose by 19,88% amounting to  US$ 901.09 million, while turnover was relatively flat.

In the operational side, Garuda’s international operations remain to struggle with revenue passengers per kilometer declined by 1%, while available seat per kilometers increased by 17%.

Meanwhile, Garuda‘s international seat load factor was only 63,6% in 1Q2014 or declined from last year with monthly average above 70%. With load factor down and unit cost grow up, it caused declining profitability.

In the other hand, Garuda also faces high risk of liquidity and solvency. Garuda’s debt which must be repaid in this year is higher than its cash and receivable. Garuda cash carrying reserves was only US$ 247.69 million with loans maturing in this year amounting to US$ 375.44 billion.

Garuda’s current ratio stood by 0.58% or the lowest among other airline companies, so Garuda’s ability to pay off its debt has been remaining low.

How about the other airlines?
ASCEND is comparing some of the airline companies that are listed in local bourses and publicizing their reports.

One of the biggest Garuda’s rival in South East Asia region is Singapore Airlines. It recorded turnover inched up marginally, but its earnings declined by 5,12%. Singapore Airlines which set up more than 100 fleets flying from and to many cities in Asia, Europe and North America, is larger than Garuda by market capitalization, operating range and profitability. 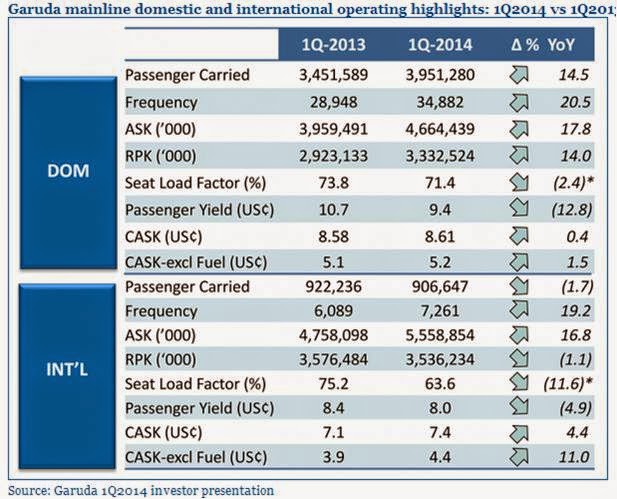 Garuda has also been facing Malaysian Airlines and Thai Airways in the region. They have a network in many large cities in Europe. Thai Airways even has route to Los Angeles. The financial performance of both of them depressed slightly, not as deep as Garuda.

Meanwhile, Garuda currently has only 1 route to Europe, 2 to the Middle East and some routes in East Asia and Australia with total passengers for last year around 11 million people domestic and international.

Then, the low-cost carrier segment, Citilink, a subsidiary of Garuda, is still relatively smaller than AirAsia, Jet Star, Tiger Air or Scoot’s Singapore Airlines. Citilink has only 24 aircraft operating in only a few cities in Indonesia with 2 international flights.

Among low-cost carrier airlines, AirAsia booked the highest profitability among others with a profit margin as 10.73% but turnover depressed, while Tiger Air recorded losses amounting to US$ 75.95 million in first quarter, the biggest loss in low-cost carrier segment.

As the busiest routes in the region connecting Singapore to the main island of Java, until this day, the flight has been dominated by Singapore Airlines and AirAsia, while Garuda has been the third.

The condition of airlines industry in the region have is challenging with excessive capacity levels provoking a reduction in yields and load factor.

Posted by Rowena Suryobroto at 7:23 PM